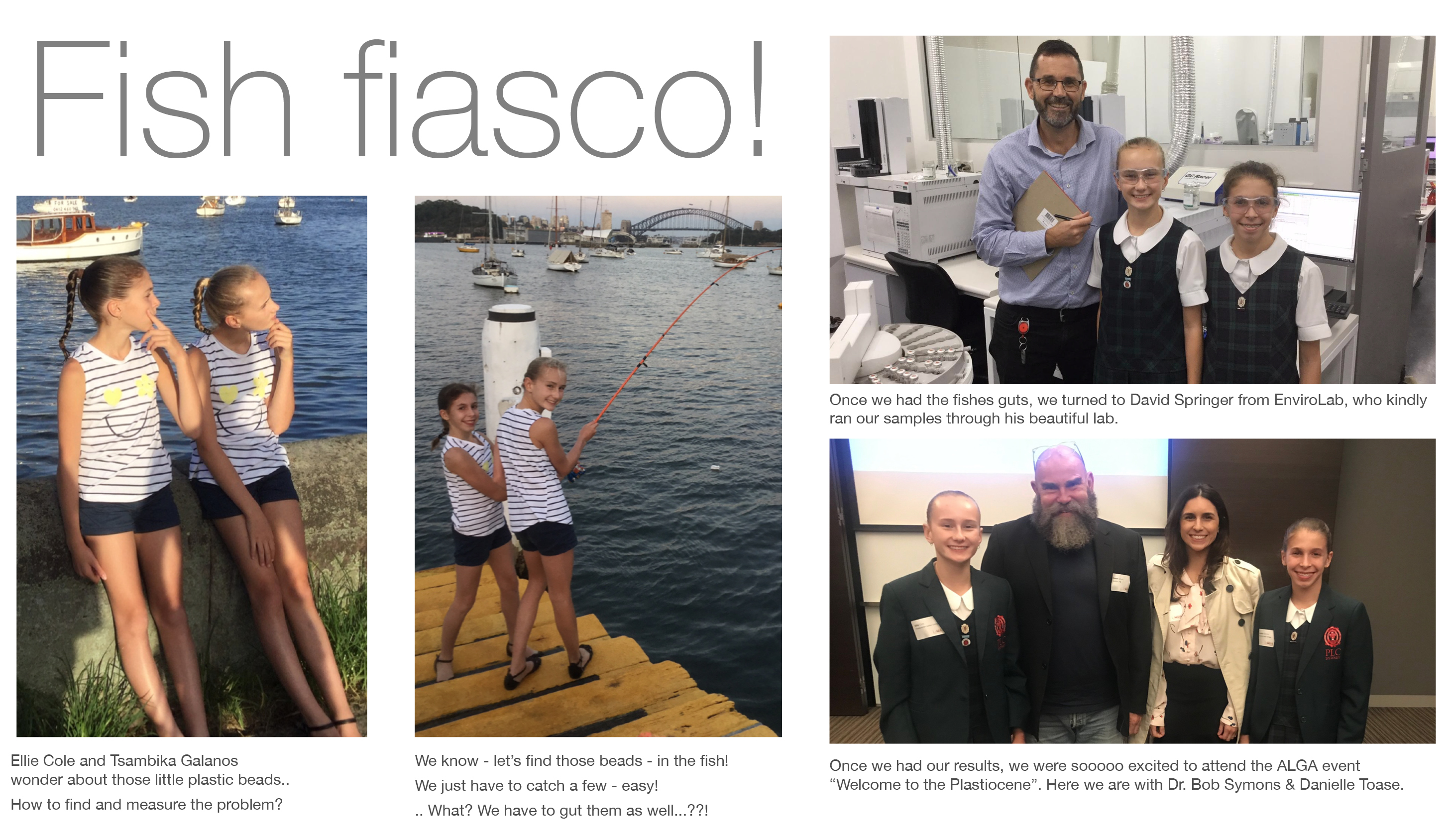 We are two 12 year old aspiring scientists, in Year 7 at PLC Sydney.  We are currently researching microplastics as part of our preparation to enter the University of Sydney, Australian Museum Eureka Prize called “Sleek Geeks”. Last year in the same competition, we placed 2nd in Australia with our movie “Dust Detectives”.  This year, for our Sleek Geeks project, we are investigating whether microplastics, like found in beauty products, can make their way into fish.

Back in November 2018, we were having a sleepover and decided to use some face masks and scrubs. When we were washing these off we noticed that it contained lots of tiny beads. We began thinking about what those tiny beads were, so we checked the back of the packaging and there were many very long chemical names. A quick Google search told us that it contained microbeads. We also discovered that microbeads are bad for the environment so our research began and we agreed that this would be a perfect topic for our next Sleek Geeks film!

Firstly, we carried out background research to find out how wastewater is treated. We discovered that the microplastics from cosmetics are passing through the wastewater treatment process right into our oceans and this was how it was getting into the food chain.

We soon discovered that not only are microplastics found in cosmetics, but they are also found when people wash clothes.  Apparently, large puffy jackets are also one of the top contributors of microplastics in clothing.

Next, we searched for a scientist who knew about microplastics. We came across a newspaper article on the topic which led us to meet Vivian Sim at the University of NSW in the summer holidays. Miss Sim told us all about microplastics, and that microplastics were more extensively found than simply in microbeads, and that all of these can harm our environment. We learnt that there are microplastics in cosmetics, clothing, and even toothpaste! Miss Sim also told us that microplastics may absorb toxic chemicals in the water and this means it can be an even bigger problem than just eating plastic.  Miss Sim also helped us with the chemical names on the back of products and that an easy way to know if there are plastics inside is to look for the words, “copolymer” or “crosspolymer”.

Miss Sim helped us come up with a method of how to extract the microplastics from fish. We would catch fish, gut them, and then open up the stomach and empty the contents into coffee filter paper over a sieve. We used tweezers to go through what was in the stomach and pull out any small plastics that we could see.

We had a few challenges. Firstly, although we are very good at fishing, we had no idea how to gut a fish! Our parents took us to the Sydney Fish Markets on a rainy Saturday and the fishmongers showed us how to gut a fish. They made it look easy but it’s actually really difficult (for us anyway).

Then we went fishing - a lot of times. We caught many fish - most of them were too small and we had to throw them back. We mainly fished in Birchgrove and Booker Bay.  We went through lots of fish guts. But unfortunately, we couldn’t find any plastics. We did find lots of shells, scales, and lots of very very smelly things, but no plastics.

Later we decided that we weren't going to have much luck fishing so we went to seek out some professionals.  We went to Botany Bay and Birchgrove and began asking the local fisherman for fish guts.  This is because the fisherman were catching some really big fish and we thought that perhaps the older the fish, the more plastics the fish might have accumulated. In one night, we had collected many samples of fish guts thanks to the kind fishermen who graciously donated their fish guts to us.

We still thought that our method was quite good, but we weren’t finding plastics. Again we sought out some professionals for help. We contacted a laboratory (Envirolab) and kindly asked David Springer if he could please test our samples of fish guts in the lab for plastic.

After school one day we went into Envirolab to see David to get our results. We were really excited to see if our guts had any plastic in them. This time we were successful.  The lab ran the samples through the GCMS and found phthalates in all three samples.

The chemicals that were detected included Diethyl phthalate, Dibutyl phthalate, Bis(2-ethylhexyl) phthalate and Di-n-octyl phthalate. David explained to us that finding phthalates was a good indicator that plastic was in the water, but not necessarily that the fish had digested the plastic itself.

After getting back the results we were really excited to have a tour of the labs at Envirolab.  There were certain rooms in the lab that were used for different things.  In one room there was a special machine that tests water samples and extracts a dangerous chemical from these water samples.  The tour also showed us a lot of complicated machines that test certain things.  At the lab, we learnt about how plastics and chemicals are tested and how they affect us.

So we were close, but not close enough. We then contacted ALGA because we saw that there was a branch meeting specifically on microplastics. We went to the event, “Welcome to the Plastiocene” on March 27th, 2019. We sat in the front row and heard from some amazing scientists. We learnt about the scale of the plastic problem from Dr. Scott Wilson and also about the Australian Microplastic Assessment Project. This is a nationwide citizen science survey of microplastics on Australia’s shorelines.  We also heard from Dr Bob Symons, who spoke about the challenges of testing microplastics. Anna Lundmark from Hunter Water explained the processes involved in treating waste water and why it can be hard to remove microplastics in water.

At the ALGA event, we talked to many scientists. We learnt that there is plastic smaller than microplastics such as nano plastics, and that it can be difficult for scientists to accurately test microplastics. This made us feel a little better because we were also finding it difficult! We found the ALGA event fascinating because it helped our knowledge about microplastics, waterways and the way water it is treated and also what we can do to help the environment.

At the end of the event Dr Bob Symons offered to test some of our fish at his lab. So off we went to catch some more fish. Thankfully Bob wanted whole fish, which meant that we didn’t have to gut them (phew!).

Many people wonder how two 12-year-old girls came across looking at fish guts. Fish guts from fish may vary in size, shape and colour, but one of the many things that fish guts have in common is the horrible stench! Small fish guts that we collected came from baby snapper, baby bream, sole and baby flathead.  Most of the guts that we collected were a blood red colour with sometimes streaks of a dull yellow.  One of the guts that we collected were black showing how polluted the water it lived in was.  We are very grateful for all the help we have had with our project so far, and we are looking forward to getting some more results and finishing our project in May.

Please should you wish to know more, or could provide expertise assistance in anyway contact: Annie-Louise Martin amartin@plc.nsw.edu.au

Written and submitted by By Ellie Cole and Tsambika Galanos.