A major piece of transport and logistics infrastructure is being constructed on a former Department of Defence Military School and Logistics Terminal in Moorebank, NSW.

Liberty Industrial have been engaged by Qube Logistics to deliver three separate demolition, remediation and site preparation work packages associated with the construction of the terminal. 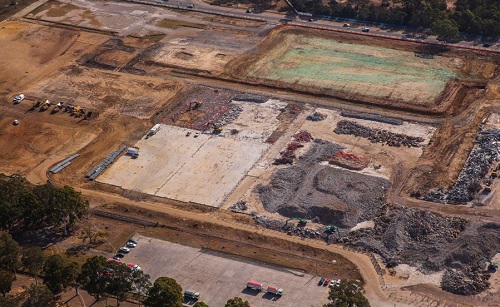 In their own right each work package comprises a large and diverse scope of work but when combined and executed concurrently these three work packages form an extensive and complex civil demolition and land remediation undertaking.

Liberty Industrial deployed a sizeable fleet of plant and equipment to carry out the task including more than twenty excavators ranging from 20 to 120 tonne, seven 40 tonne dump trucks and a range of compactors, dozers, graders, drum rollers, water carts and service vehicles.

A mobile workshop for plant and equipment was established on site for all servicing and maintenance requirements and operated by Liberty Industrial’s mechanics, boiler makers and fitters.

The former use of the site as a military complex predating World War 2 meant that the presence of unexpected finds including potential unexploded ordinance created a complex and significant risk as the works progressed. 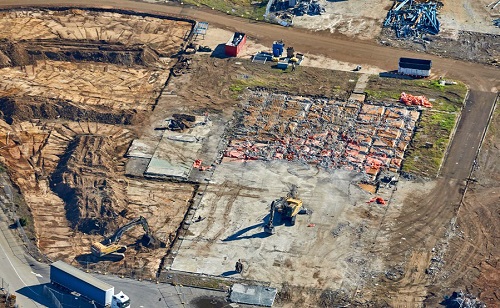 Liberty Industrial demolished approximately three hundred individual buildings and large structural warehouses including slabs and footings exceeding 300,000m2 in total. In excess of 140,000 tonnes of concrete was demolished and pulverised for reuse on site.

Over 150,000 tonnes of contaminated soil was excavated and remediated utilising various techniques including sorting and segregation, bioremediation, asbestos hen-pecking and haulage and disposal.

As works progressed a further 30,000 tonnes of asbestos impacted soil that was encountered unexpectedly. This large quantity of unexpected finds required Liberty Industrial to accelerate works in order to meet the pre-agreed target dates despite the significant increase in the scope of works.

Liberty Industrial’s project team responded to significant increases in scope with efficiency and professionalism, developing a program of work that broke the site into priority areas to enable early handover for commencement of construction works.

They interfaced and coordinated works according to client and adjacent contractor requirements, while maintaining productivity to ensure efficient handover of the numerous stages on time while upholding rapport with all project stakeholders.

The complex nature of the project and reporting structures meant that numerous stakeholders needed to be considered and satisfied throughout the duration of the works.

Liberty Industrial’s project team managed the expectations and requirements of various stakeholders including a multitude of government regulatory authorities, the client and various client representatives including a project management company and many other client side third party consultants and advisors.

At the project’s peak, Liberty Industrial had up to 100 personnel working on the site with more than 10 separate workfronts operating concurrently.

Close to 300,000 hours of work have been completed on the project without injury or incident.

Almost 200,000 tonnes of demolition material has been recycled over the course of the project including brick, concrete, asphalt, steel, mulch and other materials.

The project is on track for completion in December 2018.